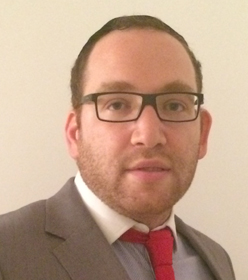 Motti Gruzman is the Chief Executive Officer of Excelion Development Co.
Under his thoughtful and careful leadership Mr.Gruzman has strategically grown the firm from its original one office in the most important community in Belgium,Antwerp to its current size of 10 strategically located offices throughout Belgium, United Kingdom, France, Spain, Germany, Austria, Switzerland, Romania, Malta and Andorra.

Graduated in Business Management in Antwerp High school Mr. Gruzman has been an active real estate executive and investor for more than a decade. Started his career in Antwerp, Belgium “by working and investing in developing” BTL properties for a number of years before moving upwards to high-scale projects ,where he quickly became a ‘top’ real estate entrepreneur. Together with his brother Chaim, he founded Renobelg Gcv in the Fall of 2007. Between 2010 – 2014 he founded a couple of real estate investment companies. In 2015, all companies were merged together under one roof and that is how Excelion was founded. They worked closely together growing the firm organically and were joined by Dan Zimmer Director of BSD Invest AG, who helped grow the firm to the size it is today.